Showing posts from October, 2013
Show all

My Other Prairie Skills 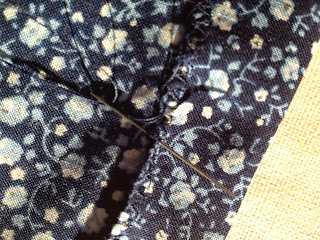 If you read this blog all the time — bless you! — you may have noticed some spotty posting over the past couple of weeks. That is because October has been (as it typically is) a very busy month for us. In addition to all the kids' extracurricular activities,  harvesting , and winter garden prepping going on this month, I've been investing time in some other domestic skills: First up: sewing. In the photo above, I am slip-stiching a hem by hand. Most of this dress was made on my new machine , but it also involved a fair amount of hand-finishing around the cuffs and collar. This bout of dressmaking was in service of (what else?) Halloween. After about a week of work, here's the finished product: This is Tiegan's "Kirsten" costume. (Kirsten is an 1800s prairie girl from the American Girl series . I prefer to think of her as Laura Ingalls Wilder .) The photo above was from the final fitting of the dress, which I did most of (although Tiegan work
Post a Comment
Read more 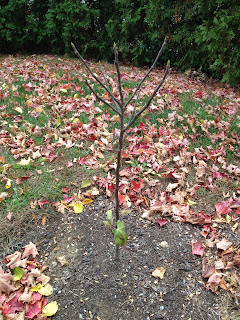 Back in the spring we planted a fig tree in the orchard. After a season of growth, it has graduated from a mere stick to a slightly more respectable baby tree:  Frost has killed off its (very few) leaves, so it's time to get our little Brown Turkey tree wrapped up for winter. Figs are not reliably hardy in our growing zone (6a), so we need to give it some protection from the cold so it doesn't die back too much over the winter. To do this, we repurposed two of the potato boxes we are no longer using to create a little fort around the tree: Kirk set one box atop the other and screwed in two extra boards to across the gap to join them together (which you can see better in the picture below). This contraption is all wood and heavy as all get-out, so it should hold its ground despite our typically blustery winter weather .  Once the boxes were in place, we filled the whole thing to the top with leaves we raked up: We have no dearth of maple leaves
Post a Comment
Read more 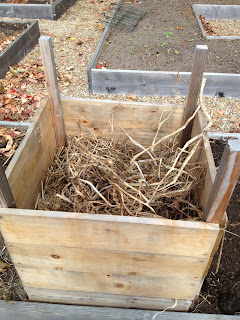 This season we planted 24 seed potatoes in six potato boxes, which we layered with compost until the boxes were filled to their tops. The vines have been dying back for a good month or so, but we left the potatoes in the boxes to allow their skins to thicken underground for storage. (Well, we dug up some to eat right away, but mostly we were planning ahead to have winter stores.) Since we've reached frost, they are definitely dead: Today we dismantled two more potato boxes and dug up the potatoes in them. After digging up somewhere around 15 pounds of red and white potatoes, we spread them out in the sun to dry out. Normally we would do this on our patio table, but that was already in the shade by the early afternoon. So we set them on the top of the portable chicken run instead:  At first we thought the chickens would be jumping up to peck at them, but the ladies were far too interested in gobbling up the last cherry tomatoes in that area (we put the girls out t
Post a Comment
Read more 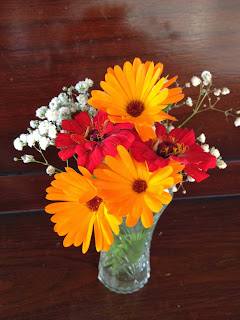 Ok, this is it. We've had a full six months of cut flowers, but we're having frosty temperatures here now, and these are the last bouquets of the year. It's been a great first season for the cutting garden, and I'll be sure to go over the photographic record before going shopping for more seed and perennials next year, so I can fill in the gaps of color and bloom time for even better arrangements next year. Baby's breath, calendula, and zinnia. Zinnias.
Post a Comment
Read more 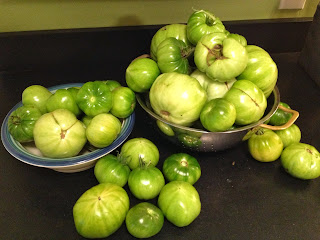 Last night we had a frost advisory, and while my gut reaction to it was that the air felt a smidge too humid for us to worry about it, we finished covering our greenhouse tunnels in plastic anyway. We also brought in the last of our summer fruits, just in case. Here's our forced harvest: A whole lotta green tomatoes. We are hoping for two pies out of these, plus some to fry up. (Still looking for a great recipe for fried green tomatoes, by the way. Our only previous attempt was less than exciting. If you have a great recipe, please comment.) We also have a row of tomatoes on the window sill that were starting to turn red, and they can continue to ripen indoors. We should have tomatoes that way for another couple of weeks, I think. We also brought in all of our butternut squash and our ripe pumpkins, although we left three on the vine but blanketed in row cover fabric while they continue to ripen from green to orange. This is by far the best we've ever done wit
Post a Comment
Read more 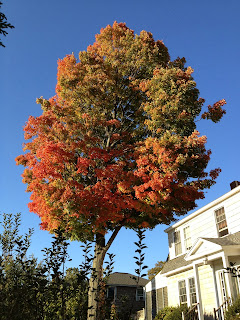 Temperatures are dropping, the wind is picking up, and our lovely maple is starting to put on an October show: Even so, summer isn't over until baseball ends for the season. And 'round these parts, that means when the Red Sox make their last out.  The day the baseball season ends is, for me, one of the most depressing days of the year. That's the day that summer is utterly, indisputably gone . No turning back from the onslaught of winter now. But it's not over! Grand   slams  abound, and the Sox are headed to the World Series. I'll be honest, all these late playoff-watching nights have left me more than a little sleep deprived, and the garden has gotten the bare minimum of our attention this October. Despite our benign neglect, the garden is still providing us with summery fruits and vegetables. Having not gotten the message that it's almost Halloween, there's still one zucchini plant producing, as well as tomatoes, raspberries, and
Post a Comment
Read more 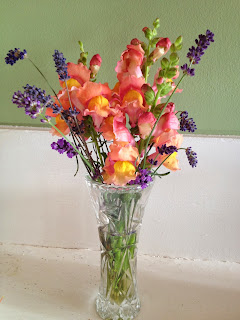 Only one bouquet to show this week, and barely anything left in the cutting garden now. The best flowers now are in the perennial border, so maybe next week we'll have an outdoor-themed Flower Friday to show them off. Snapdragons and lavender.
Post a Comment
Read more

From Jalapeño to Chipotle 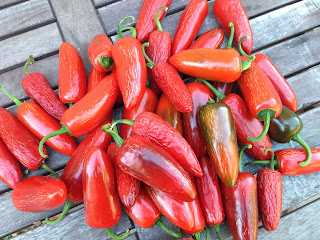 This year we have excellent jalapeños. I grew them from seed ( El Jefe ), and they are super-spicy —  unlike last year's crop . We've already pickled several pints of slices for future plates of nachos, but we still have loads left on the plants. Yesterday we grabbed a pile of ones that have turned from green to red to preserve them in a new way: smoke them into chipotles. While I cut the stems off of the ripe peppers, Kirk started the fire. He used newspaper (and apparently dried leaves) in the chimney to start some mesquite charcoal and scrap bits of cherry wood to burning: Once the wood and charcoal were burning, he split it into two small fires on the sides of the grill, leaving the center open: That center section is where the peppers go, since it isn't over direct heat. The idea is to heat the peppers slowly to dry them and infuse them with the smoke, not to burn them to a crisp: Once the everything was in place, we put the lid on the
Post a Comment
Read more 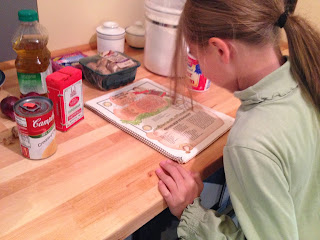 In yesterday's Boston Globe (online, at least) there was a piece about bringing back Home Ec courses in schools. Apparently, "kids these days" don't know how to do anything important any more, and all the practical skills have been pushed out of schools because they aren't tested.  Part of me thinks, "Yes! Home Ec and Shop are totally important life skills." Also, I want to be the curriculum writer and teacher of that subject because it would be a blast and I would make it so awesome. The other part of me thinks, "No! How much more can you possibly expect a school to accomplish? Can't parents teach their kids anything any more without outsourcing it to already-overburdened schools?" And a third part of me thinks, "Who cares? My kids are well on their way to self-sufficiency. They clean their rooms, do their own laundry, care for the animals, and help with daily kitchen clean up."  Best of all, they are also lear
Post a Comment
Read more 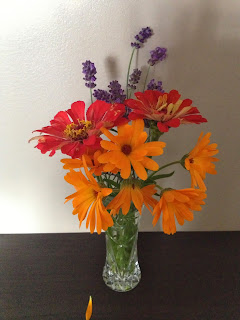 I'm glad that zinnias are such a powerhouse of an annual flower. I just wish I had colors other than pink left. Lavender, zinnia, and calendula. Zinnias. Zinnias and wild asters.
Post a Comment
Read more 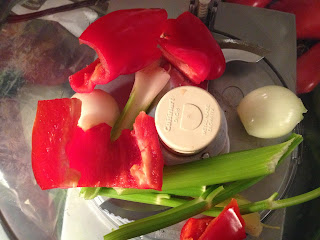 My all-time favorite soup and sandwich combo, especially as the weather turns cooler in the fall, is grilled cheese and tomato soup. I think I ate this every single Monday night in college, heading directly to the dining hall from chorus rehearsal. (I'm pretty sure I had French fries and Texas Pete on the side as well. Can't pretend I was too all-fired concerned about healthy eating at The Pit .) Since it's much cooler now, and since Wednesdays involve a lot of chauffeuring the kids around, it was a perfect night for some tomato soup. It's quick and easy, even to make from scratch and not from a can. Here's what I did: Garden Tomato Soup 2 Tbs. olive oil 1 small onion 2 cloves garlic 3 ribs celery 1 red bell pepper 6 basil leaves (about 2 Tbs. fresh) 1/3 cup fresh parsley 1 Tbs. flour 1/4 cup half and half 1 quart  canned tomato sauce  (plain, no seasoning) 2 tsp. brown sugar 2 tsp. Worcestershire sauce salt and pepper to taste
Post a Comment
Read more
More posts