Showing posts from November, 2015
Show all

From the Archives: Okra Quick Pickle 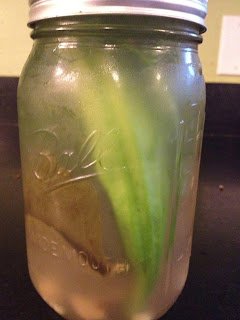 Some time over the summer, before we tore apart the kitchen, I decided to try my hand at pickling okra. I know this because I found this photo lurking in an unpublished post:  Careful forensic evidence reveals that this photo was taken on the old kitchen counter, while the kitchen was still lime green in sections. I also recall being inspired by some pickled okra we had at Loretta’s Last Call (otherwise unmemorable except for the pitchers of sweet tea) before a game at Fenway on the Fourth of July. So I imagine I threw some early okra in a jar back when the okra was just starting and we couldn’t harvest enough to eat or freeze in a decent-sized batch yet.  I also found a cryptic note to myself reading " old horseradish brine, vinegar, water, dill, peppercorn, garlic” under the photo. So, to the best of my knowledge, here’s what happened. I used a jar that had recently been emptied of its horseradish pickles and tossed in three pods of okra, in what can only be d
Post a Comment
Read more

The Chickens Are (Finally!) Laying 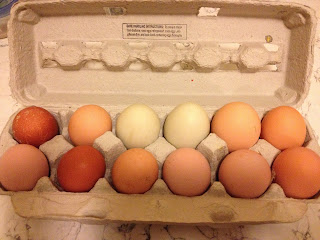 Our older chickens molted early, and our younger ones finally figured out the whole egg-laying thing , so we are flush with eggs of many colors and sizes: Despite the short hours of daylight, we've been able to turn the light on for the girls , and now they're averaging about three eggs per day. We suddenly find ourselves with two dozen eggs in the fridge. This comes at a great time: Wednesday is Pie Day , and holiday baking will be in full force immediately thereafter.  In the meantime, quiche is one of the quickest ways to blow through a bunch of eggs, so that's what Kirk made for dinner. This was a Cheddar Bacon Broccoli Quiche, and it was outstanding: Cheddar Bacon Broccoli Quiche For the pastry: 6 Tbs. butter 2 Tbs. shortening 1 1/4 cup flour 1/2 tsp. salt 1/4 cup vodka For the filling: 4 strips of bacon 1 medium onion 1 cup chopped broccoli 4 eggs 1 cup half and half 1 cup milk 1 cup grated cheddar a pinch of thym
Post a Comment
Read more 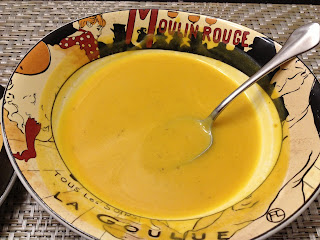 We still  aren't done with the kitchen renovation, but Kirk has been managing to put together some healthy garden meals anyway (even though washing the dishes in the upstairs bathtub is no fun ). Last night we had a new Curried Butternut Soup: Photo credit: Tiegan Trach (who could not resist eating most of it first) Curried Butternut Soup 2 medium red onions, finely diced  4 Tbs. butter Salt and pepper to taste 2 small butternut squash, peeled, seeded, and diced 4 cups chicken stock 8 cups water 1 Tbs. ginger garlic paste 1 Tbs. curry powder 1/2 cup half and half 1. In a large stock pot, melt the butter and sauté the onions on medium heat until soft. Generously season with salt and pepper. 2. Add the butternut squash to the pot with the onions and stir, then add chicken stock and water. Cover the pot and allow to simmer over medium heat for about 30 minutes or until butternut squash is cooked through. 3. Add the ginger garlic paste and curry po
Post a Comment
Read more

Get Involved: Protect Our Pollinators 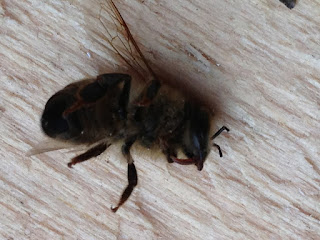 Remember my poor, probably pesticide-poisoned honeybee ? The fact that she died with her tongue sticking out is a classic sign that pesticides were involved. Well, it just so happens that this week there's a hearing scheduled on Beacon Hill about limiting the use of neonicotinoid pesticides in Massachusetts. This bill is supported by Massachusetts beekeepers , who are working to keep decisions that affect honeybees and other pollinators out of the hands of the pesticide manufacturers.  If you live in Massachusetts, take a moment to write your state rep and senator in support of H.655, An Act Protecting Massachusetts Pollinators . Send an email in support of the bill to committee co-chairs Sen. Anne Gobi and Rep. Paul Schmid . While you're at it, copy your own reps. In Newburyport, that's Sen. Kathleen Connor-Ives and Rep. James Kelcourse . If you live in another part of the state, you can find your reps here .  It only takes a few minutes to make a dif
Post a Comment
Read more 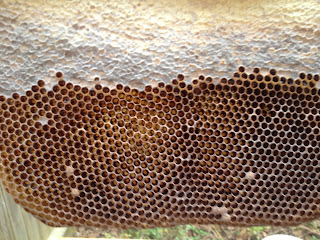 As I alluded to ever-so-briefly in my previous post , our bee colony has collapsed. Through October they seemed to be doing fine, but when I checked in on a warm day earlier this month, it was eerily quiet. No bees at all at the entrance, and no humming of activity.  I opened the hive to find lots of gorgeous combs of capped honey, but no bees at all. No living ones, anyway. There were a few dead ones on the floor of the hive, and that was it. Thousands of bees had simply vanished into thin air.  Later we went through the hive to take some photos to send to our bee mentor for some insight on what could have happened to the colony. Here's what we found: Lots of comb that should have brood cells (baby bees in the comb) had nothing at all. The cells at the top are capped honey for winter, but the ones at the bottom have only a very spotty brood pattern (the parts that look like closed dots in the honeycomb). There are no eggs in the comb either, a sign that our queen
Post a Comment
Read more

We Buried a Cat Today

November 05, 2015
We buried a cat today. We brought him home from the neighbor's yard, where we found him stiff and cold, paws unnaturally curled and raised as if to fend something off. His teeth were bared a bit, but his eyes were closed. A snow shovel wasn't bier enough for what was so recently a purring, warm thing, so I brought up from the basement a cloth, a green curtain that I had sewed long ago and which had once hung in the dining room of the Red House, where we fed babies with plastic spoons and marked time with small colored candles in cakes. Now that's buried too, wrapped around the cat whose body suddenly made sense again as we rolled him over and he looked like he was sleeping. "He doesn't look scared any more," said the boy as we tucked in his friend and carried his body to the hill behind the fence, stirring up papery orange leaves as we went. Three of us scooped fistfuls of light, silty soil over the bundle, and I felt how soft the dust was, fall
1 comment
Read more

The Little Apple Tree That Could 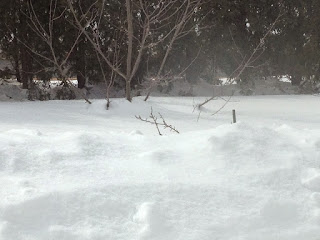 You may recall that the epic Winter of 2015  brought with it a lot of damage to our plants , especially those in the perennial border and the orchard. Our small Granny Smith tree was hit particularly hard, since it was, for a time, completely buried in a full Gronk of snow : When the snow finally melted, its massive weight broke every branch on the little tree: We figured it was a total goner, but since it managed to both blossom and set fruit (!!!), we didn't remove it. The result? One perfect apple: This is the one and only Granny Smith apple harvested from that tree ever , and it was a great one: extra large, crisp, and juicy. It's a shame the tree isn't worth saving (we have some orchard redux in mind for next spring, actually), but it was nice to see it put out one prefect piece of fruit.
Post a Comment
Read more
More posts