Showing posts from July, 2016
Show all

Things Are Looking Up 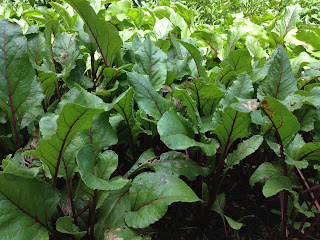 From our very cold, slow-to-start spring and  current drought  to the loss of pollinators and groundhog raids , it’s been a really rough go of it this year. Though we were beginning to despair of ever having food to eat this summer, a bit of rain this morning and some successes have us feeling more optimistic. Here’s what’s going right this week:   Remember the beet leafminers that nearly defoliated all of our beets and chard? Thanks to a regimen of removing affected leaves and twice-per-week applications of neem oil, both beets (above) and the Swiss chard (below) have bounced back quite nicely, and we’re now able to harvest both at will. The cold, cloudy winter and spring made it hard to get our tomato seedlings started indoors, and many didn’t make it when transplanted because they were so puny. Then came the drought, and though we have some blossom-end rot due to those conditions, we also have plenty of tomatoes headed our way. They’re a couple weeks behind schedu
2 comments
Read more 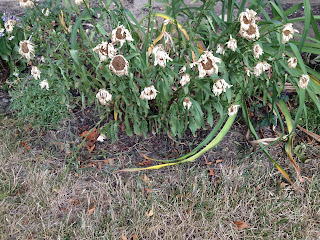 According to the U. S. Drought Monitor, our corner of Massachusetts is officially in a severe drought .  This is a classic application of Murphy’s Law, since we actually planted grass in the front yard this spring. Those efforts were doing reasonably well a few months ago, but we haven’t had a good rain in what feel like forever, and now things look like this: In case you were wondering about our garden irrigation habits, I aim to make sure that the productive food areas get an inch of rain per week, while ornamentals, herbs, and the grapes get a half inch. I keep an eye on the rain gauge and make up the difference with water from the rain barrels or the hose.  Things are so dire right now, though, that I will have to start watering the flowers more regularly as well. To wit, the hydrangea I planted last summer: And that’s in a shady  spot. Did I mention that we are also on something like Day 5 or 6 or a heat wave? (Well, Boston is. Newburyport gets the benefit of s
Post a Comment
Read more 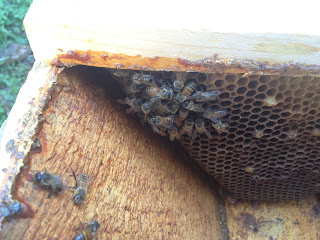 When we got our bees back in April , we were hopeful that they would get a nice head start this year since there was still a good deal of drawn comb from last fall’s hive. But there were problems from the get-go, and it seems that this colony has also failed.  When we went check on the queen to make sure she was out of her cage, we couldn’t find her, and there was no evidence of her laying. We called the person who sold us the bees right away knowing that if the queen died or failed we would need another right away. He was not sympathetic.  The whole thing was incredibly frustrating. You hear a lot about beekeepers being excited to teach other people about keeping hives to try to help protect honeybees, blah blah blah. We had quite the opposite experience, dealing with someone who clearly thought we were stupid and should just wait it out because we didn’t know what the queen looked like. Long story short: we were right, our queen failed, and then the bees died out, s
Post a Comment
Read more 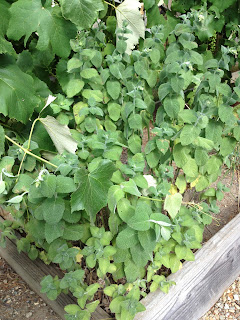 Early summer is when our mint is at its best, and there’s a whole lot of it: Usually we don’t do all that much with it: throw it in a few salads, and ... well, that’s about it. Kirk wants to make mint ice cream, but we haven’t ever gotten around to that. He’s the only one who would eat it. Anyway, I was on the hunt for a refreshing drink with dinner the other night and was pleased to recall that, in addition to a garden full of mint, we had a bottle of homemade limoncello just chilling in the fridge: It was much fuller at the beginning of the week, and now I barely have any left, but that’s because I believe I’ve found its higher calling: a drink I’m calling Sunshine Spritzers. So light and refreshing, sweet but not too syrupy. It’s perfect  for July. This homemade limoncello was a gift from my friend Betsy, who was kind enough to share her not-so-secret recipe for this. It will last forever (ok, I can vouch for two years) in the fridge, and it’s a lot like ma
Post a Comment
Read more
More posts