Showing posts from September, 2017
Show all

A Tale of Two Beehives 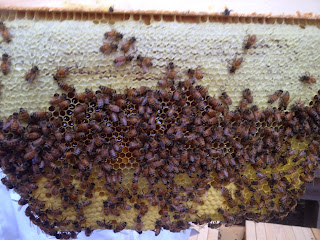 Back in August, our bees swarmed and broke themselves into a new hive. I caught the swarm and Kirk built a new top bar hive to house them. Since then, we’ve had two side-by-side hives.  We helped the new hive get started by feeding them some simple syrup so they’d have extra energy to build all the new honey comb they need. I’m not sure they needed our help, though. They built comb super-fast, and they now have 11 or 12 bars completely drawn in the space of just five weeks. It’s pretty clear that when the original hive swarmed, they sent out their best and brightest: all workers, and lots of them. We were worried about the new group having enough time to get their house in order for the winter, but they’re doing really well: This is just one of many combs that is heavily laden with honey. Capped honey (the white part at the top) is ready to go for their winter reserves. The center (where most of the bees are) is full of nectar that is ripening and should be capped
Post a Comment
Read more 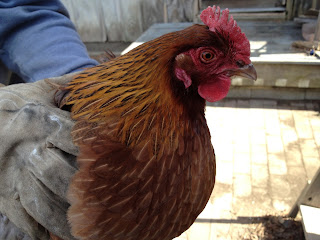 On Tuesday Kirk went out to look for eggs and found Lizzie lying on the ground underneath the ramp to the henhouse. So he had to go out in the rain and bury her back on the hill. Though the other hens left her body alone, it’s not really the kind of thing that can wait for a sunny day. You may recall that Lizzie was a very troublesome bird. She had a bad habit of pecking at her own feathers , to the point that her back and butt were totally bare. Painting Blu-Kote on her skin to protect it was always an adventure. Note the gloves in the photo below: She hated me and tried to attack me every chance she got . I don’t think the other chickens liked her much, but they seemed to mostly ignore her. She wasn’t a great layer, either. Still, we’re surprised she’s gone, because I sort of figured she’d live forever just to spite me. On Monday we noticed that her comb was droopy, but we figured she was just molting. By Tuesday she was dead, and we don’t know why. She could have h
1 comment
Read more 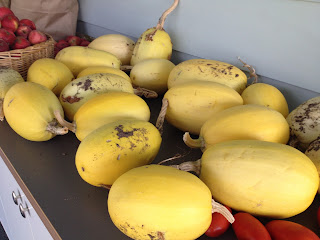 Over the past several weeks, we’ve been harvesting our spaghetti squash. This is just a portion of it: They’re a little dirty because I picked them on a damp day, and they’re out on the porch counter to dry out a bit. This looks like a lot, but we’re not actually going to be able to store — or even eat — all of them.  Despite the fact that spaghetti squash is a winter squash with a good, tough rind, nearly every one of ours has a breach in it: Whether nibbled on by squirrels or used as an insect nursery by squash bugs, most of these have problems that have led to a pretty quick demise. There’s no way any of these will hold up in storage over the winter, so our only option is to eat as much as we can right now, before they turn into a liquified, gooey mess.  It’s not all that appetizing.  I’m also not all that fond of spaghetti squash. I mean, it’s fun once in a while, but it strikes me as more of a novelty dish than a culinary staple.   Why do we have so
Post a Comment
Read more 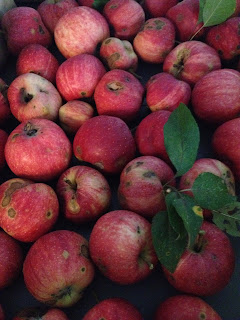 September is here, and there’s been a noticeable cooling and loss of daylight hours. We finally have tomatoes — about a month late — and our orchard decided to ripen all at once. That means I had to pick pears, peaches and apples in one feel swoop. That’s really strange, but it’s been kind of a weird growing season.  On the bright side, our Gala apple tree is having a best-ever bumper year: That’s just a portion of the apples I’ve picked so far. The tree is still covered: It’s also hard to tell in the photo — since everything around the tree is also green — but this is no longer a dwarf apple tree. I can only reach about halfway up, so we’re officially in standard territory. We’ll need to bring out a ladder to fully harvest these apples. We definitely planted  a dwarf tree, but over time it looks like the root graft ended up in contact with the soil. This can cause the grafted stock to take root and override the dwarf root stock, and I guess that’s what happen
Post a Comment
Read more
More posts